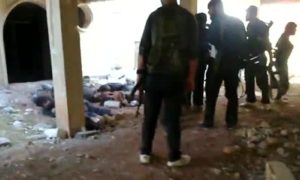 An image grab taken from a video uploaded on YouTube on November 1, 2012 shows rebel fighters gathering near alleged bodies of Syrian soldiers after they overran an army checkpoint in the northwestern Idlib province. Syria’s northwestern Idlib province has become a key battleground in the country’s conflict, especially after rebel forces seized the town of Maaret al-Numan on the Damascus-Aleppo road early last month. AFP PHOTO/YOUTUBE
== RESTRICTED TO EDITORIAL USE – MANDATORY CREDIT “AFP PHOTO/YOUTUBE” – NO MARKETING NO ADVERTISING CAMPAIGNS – DISTRIBUTED AS A SERVICE TO CLIENTS – AFP IS USING PICTURES FROM ALTERNATIVE SOURCES AS IT WAS NOT AUTHORISED TO COVER THIS EVENT, THEREFORE IT IS NOT RESPONSIBLE FOR ANY DIGITAL ALTERATIONS TO THE PICTURE’S EDITORIAL CONTENT, DATE AND LOCATION WHICH CANNOT BE INDEPENDENTLY VERIFIED ==-/AFP/Getty Images