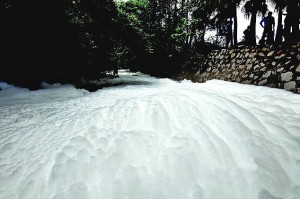 pictured: foam in a Chinese river.

Experts have been left baffled after a 50ft high tsunami of bubbles floated down a river in southern China terrifying locals.

The soapy suds – believed to have come from some sort of chemical spillage – led to widespread panic and evacuation along the river banks in Xintang, Guangdong province.

Officials later claimed that the bubbles had been caused when a non-toxic chemical deodorant has been washed out of a household rubbish tip into the river by heavy rainfall.

“People are right to be cautious but it is harmless. It made very large bubbles when it went over a waterfall but apart from one or two dead fish, it is harmless,” said a spokesman.