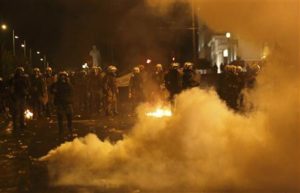 Greek riot police stand amidst gas smoke and flames from molotov cocktails during clashes with protesters during a 48-hour strike by the two major Greek workers unions in central Athens November 7, 2012. Greek police fired teargas and water cannons to disperse thousands of protesters who flooded into the main square before parliament on Wednesday in a massive show of anger against lawmakers due to narrowly pass an austerity package. REUTERS/Yannis Behrakis