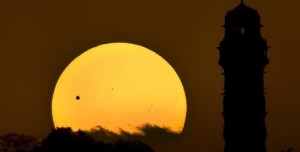 Planet Venus, pictured as a black dot, left, is seen in transit across the sun near the Victory Tower in Chittorgarh, India, Wednesday, June 6, 2012. From the U.S. to South Korea, people around the world turned their attention to the daytime sky on Tuesday and early Wednesday in Asia to make sure they caught the rare sight of the transit of Venus. The next one won’t be for another 105 years. (AP Photo/Atish Aman)